6 Ways To Get Rid Of Fungus On Skin

Fungus on the skin can either be a demertophte infection or a yeast infection. It appears as a form of rash or white spots on the skin. The fungal infection can spread from one person to the other through contact. Infections are named depending on the part of the body they appear.

Funguses thrives in moist places, and therefore as a general care, dry the skin completely on folds and areas that remain covered for long periods such as the feet. There are other effective ways of getting rid of fungus on the skin.

Tea contains special elements called tannins that kill the infection-causing fungus. It also has antibiotic and caustic properties that ease infection symptoms such as the burning sensation, swelling and irritation of the skin.

Soak tea bags in warm water to bring out the tannins. Chill the teabags for about 20 minutes then place them cold on the affected parts. For fungal foot infection, soak the feet in boiled and chilled tea water. The treatments should be repeated every day until the infection goes away.

Coconut oil contains medium chain fatty acids. These fatty acids destroy the conducive environment for the growth of fungus by lowering the pH of the skin. In turn, the infection clears.

Apply natural coconut oil on affected and adjacent areas of the skin and leave it to dry. It can also be mixed with cinnamon oil to increase effectiveness. Do it twice a day until the infection clears. 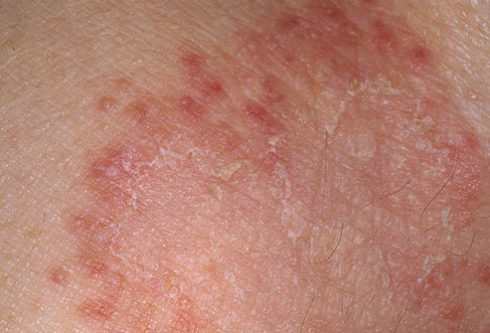 Tea tree oil is commonly used to get rid of fungus on the chest and the back. The oil contains antifungal elements that destroy fungus on the skin. It also prevents the spread of the infection to other parts of the skin due to its antiseptic nature, making it suitable for treating fungus on skin areas in contact with clothes.

Combine the oil in equal parts with olive oil and almond oil or mix with aloe vera in a ratio of 3:1. Rub the mixture on the infected areas twice a day for several weeks. Always massage the treatment on skin areas surrounding the infection to curb the spread of the fungus. Expectant women should not use tea tree oil remedies.

Apple cider vinegar contains antimicrobial properties that kill any fungus causing an infection. Its acidic nature prevents the spread of the fungus on the skin, by altering the pH suitable for fungus growth. A change in the environment suitable for fungus growth speeds up the recovery process. It can only be used for skin surface infections such as Athletes foot as it causes a stinging feeling.

It can be an oral treatment after mixing two tablespoons of vinegar with one cup of warm water. Alternatively, it can be used as an application treatment by diluting the apple vinegar in equal parts with water. Use the solution on the affected skin and leave it for 30 minutes. For thorough treatment, soak feet infections in the mixture for 30 minutes. Do not wash it off; pat dry with a clean towel.

Treatments such as antibiotics affect the bacterial composition of the body resulting in fungal growth. Plain yogurt with active cultures contains probiotics that stop the growth of fungus through the production of lactic acid. The acid lowers the pH suitable for the growth of fungus.

Habitual consumption of yogurt acts as a preventative measure. Consuming yogurt after an infection works but takes longer to get rid of the infection. Apply on the infected part by soaking a piece of cotton wool in yogurt and leaving it on the affected areas for 30 minutes.

Certain habits contribute to the growth and recurrence of fungus on the skin. Always wear loose fitting clothes and dry the skin completely, especially on folds. To prevent spreading the fungus after an infection, avoid sharing personal items such as towels and clothes.