10 Ways to Get Rid of Warts Fast and Naturally

For years, warts have been a common and extremely frustrating issue, particularly due to its tendency to spread fast and cause discomfort. Despite the huge number of medical treatments available, very few seem to be efficient at banishing warts, which are caused by the human papillomavirus (or HPV), a pathogen that can be easily spread through skin-to-skin contact.

Unfortunately, many people complain about the pain and irritations caused by warts, which make them feel completely displeasing. Needless to mention, warts can make you feel embarrassed if they happen to grow in those areas that are typically visible to other people, such as your face. This begs the question: how can you get rid of warts fast and safely? We put together a list of helpful treatments that will help banish not only warts, but also its underlying cause: the HPV.

1.) Use Baking Soda Whenever Possible to Get Rid of Warts

Apart from helping you make delicious cakes and whitening your teeth, baking soda can be successfully used when warts are seemingly bothering you. There are several ways to use this universal ingredient, and probably the most efficient one involves making a concoction of baking soda and castor oil. Once the baking soda is fully incorporated, apply this mixture to the wart at night, then cover it with a sterile bandage. Remove it in the morning, wash your skin carefully to get rid of mixture remnants, and repeat this step as necessary. You may also dissolve baking soda in water, then wash your wart-plagued foot or hand in it. Allow your skin to dry naturally once you are done washing, and make no attempts to remove the baking soda. Repeat often, until the wart is finally gone.

2.) Heat Up to Soften the Wart

One study has found that heating wart-plagued skin can potentially banish the HPV virus causing it by softening the warts. If you’re going for this particular remedy, don’t forget to keep water as warm as possible, but cold enough to avoid burns however. Soak the warts in the hot water for 10 minutes, then let your skin dry naturally.

Alternatively, soaking the warts in warm tea might also help soften them and get rid of the HPV, particularly since many herbs have powerful antibacterial, antiviral, antimicrobial and disinfectant properties. Chamomile tea and dandelion tea will work well for this, though you may also try linden and white tea as well. Add 2-3 bags to 200 ml water to make a more concentrated tea.

3.) Cover the Wart in Vitamin C to Get Rid of Warts

While eating foods that are rich in Vitamin C can boost your immunity and fight the virus causing the warts on hands or other body parts, using this vitamin externally can also help get rid of them fast. Vitamin C is mildly acidic, which means that it will irritate the warts enough to make them go away. Crush one tablet of vitamin C, then mix it with water – just enough to obtain a thick paste. Apply this mixture to the wart, then cover with a bandage. You can add a few drops of fresh lemon or lime juice to this mixture to strengthen it, or you may also use the lemon juice alone if you are unable to get a tablet of vitamin C.

4.) Wrap the Wart in Vitamin E to Get Rid of Warts

Another multi-functional vitamin that will definitely help you remove warts is vitamin E. This time you will have to simply apply the oil inside a capsule of vitamin E to the wart-plagued skin, cover it with a bandage, and let it there for just a few hours. Ideally, you should repeat this three times a day, and allow your skin to breath at night, after you have carefully washed it.

As a matter of fact, utilizing vitamin E oil in conjunction with crushed vitamin C can boost the likeliness to successfully remove warts on face, hands, and toes. Don’t try adding lemon or lime juice, as it won’t mix properly with the vitamin E oil. Adding a bit of baking soda is a good idea as long as you make sure to keep the pasta quite soft and not too thick.

5.) Rub Garlic on the Wart to Get Rid of Warts 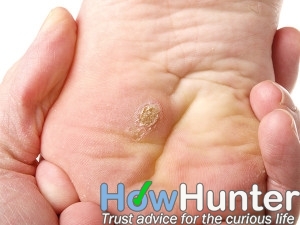 get rid of warts fast

As displeasing as they might be, both garlic and onion can fight against warts, which makes them good not only for common colds. In fact, garlic has been being used against warts over the past decades, and although there is not much scientific evidence to support its efficiency, giving it a try won’t cost you a thing. Crush garlic, and then apply it to your wart-plagued skin. You can choose onion instead of garlic if it seems like a more suitable option for you, or you might consider mixing them together, and then applying them to the warts. A bandage is optional, though it’s recommended unless you want to smell like Italian cookery.

6.) Utilize Aloe Vera Gel to Get Rid of Warts

Aloe vera is an universally-appealing remedy that can treat not only sun burns, irritations, redness, and itchiness, but also warts, and especially those that show up on your face. Due to its powerful antibacterial, antiviral, antimicrobial, antiseptic and disinfectant properties, aloe vera will weaken the virus’ resistance, therefore making it easier for your immune system to get rid of it quickly.

Break open an aloe vera leaf, and use a cotton pad or ball to soak up the gel inside. Apply the cotton pad or ball to the wart, then secure it using a bandage. When you notice the pad becoming dry, replace it. This should happen two or three times a day, so make sure to have lots of aloe vera leaves handy. It is important to keep your skin clean the entire time, so try washing it with warm water in-between aloe vera gel applications.

7.) Take in As Much Protein As Possible to Get Rid of Warts

Protein makes up 20 percent of your total body mass, and for this reason, adjusting your diet so it includes more protein-rich foods becomes of utmost importance. The University of Maryland Medical Center recommends eating fish, nuts and tofu beans, as these foods are high in protein and other important nutrients that will give your immune system a boost. Beans, almonds, and whole grains are particularly efficient due to their richness in vitamin B and calcium. Oysters are highly recommended because they are high in zinc, a mineral that functions in the most enzymatic reactions – which is essential for your immune system to be strong enough to fight the human papillomavirus that is causing the warts.

Tofu, lean meats, and cold water fish are also recommended, but make sure to limit consumption of red meats such as lamb meat, as it’s high in fats that can facilitate the spread of the HPV virus.

8.) Make Herbs Part of Your Nutrition to Get Rid of Warts

In spite of being used mostly in cosmetic industry, herbs are still an important ally you can rely on when warts are bothering you. According to ABC News, garlic contains specific antioxidant compounds that can stave off viral, fungal, bacterial and parasitic infections, which makes it a great addition to your day-to-day diet. Green tea is high in polyphenols, which are plant-based substances that possess powerful antioxidant properties. Oregano contains phenolic acid and flavonoids, two other compounds that act as antioxidants once they enter your body.

Depending on the type of herb we’re talking about, you can include them to your nutrition in different ways. For example, drinking one or two cups of green tea should be enough to flush out toxins and strengthen your immunity a little bit. Adding oregano and garlic to the foods you prepare won’t make them only tasty, but also very effective against those stubborn warts on toes, fingers, and face.

9.) Eat More Fruits and Vegetables to Get Rid of Warts

Eating more fruits and vegetables can certainly help with your wart-plagued skin – not only because they keep your body hydrated, also because they are rich in antioxidants and other nutrients that can contribute to fight the virus. Dark, leafy vegetables such as kale and spinach contain vitamin B and calcium, whilst vegetables like broccoli are rich in antioxidants, which prevent free radicals from damaging tissues, hence making them more vulnerable to viral infections.

Fruits like tomatoes, blueberries, and cherries contain huge amounts of antioxidants as well. Consider eating red bell peppers, because they have the highest content of vitamin C – twice as much as other fruits and vegetables that contain this nutrient. Pumpkin is high in vitamin A, which assists in regulating cell-to-cell communication that lays down the foundation of a capacitive immunity system to fight against the HPV, and the warts it causes.

One question most people ask is why warts are so resistant, and last for such a long time before finally vanishing away. Warts are, in fact, a barrier that protects the virus causing them, which gets undetected by your immunity system. To make sure that it won’t last for much longer, sticking a needle in the wart can alert the body about this intruder, which will eventually result in the disappearance of both the virus and the warts.

Be extremely careful when using this method, also known as immunotherapy. Before you poke finger warts (or warts in other areas of your body) with a needle, you should make sure to apply ice on the skin until it is numb. Sterilize the numb by holding it slightly above a flame, then poke it well into the wart, but don’t keep the needle there. Try poking the wart all over, then discard the needle and meticulously wash your hands to prevent potential spread of the virus.

Other Useful Tips to Get Rid of Warts Fast: