10 Ways to Get Rid Of Phlegm in Throat

Constant phlegm in throat is a very common but irritating health problem from everyone wants to get rid as soon as possible. Phlegm in throat is a concentrated, thick, yellowish and viscous fluid produced by your body and is cleared out through your throat and nose.

Normally phlegm in your throat and nose is formed due to some disease or inflammation caused by a health condition due to common cold. Everyone uses various remedies to get rid of phlegm in throat at an earliest. Some natural remedies are briefly discussed here under which can help to clear phlegm from throat in a very safe and effective manner.

You should keep yourself hydrated by drinking pure water and nutritious fluids regularly to clear out constant phlegm in throat as soon as possible. It will reduce the need of lubrication provided by the mucus as the liquid you drink will provide enough lubrication. Thus it will help in reducing the production of phlegm in your body.

It is the most effective and easiest way of removing phlegm in your throat though is sounds somewhat strange. You should cough out the phlegm congesting your throat and spit it out instead of swallowing in to remove it from your body. Though it may look odd to spit in public but it is better to breathe easily instead after spitting it out instead of hold it in the mouth and suffering from breathing problem. Swallowing phlegm can worsen your problem as it will increase its amount in your body instead of clearing it out. You can also keep tissue paper in your pocket to spit out the phlegm in it, while moving in public, without bothering others.

Saline water can also help to clear phlegm from throat by gargling with it. You can gargle by mixing one to two spoons of common salt in a cup of warm water. It will help in removing the phlegm stuck in your throat by loosening it. Do it at least once everyday. You may do it more than once. 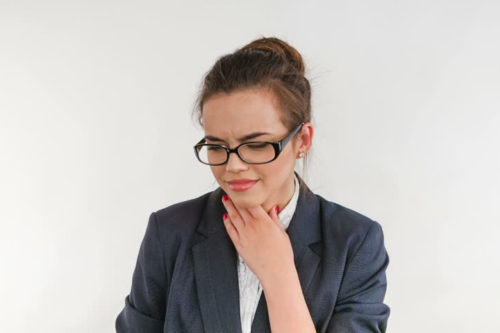 4. Drink The Mixture Of Lemon And Honey

The combination of lemon and honey in equal amounts can crate miracles in getting rid of phlegm in your throat. This combination can be ideal not only for the problem of constant phlegm in throat but also for your overweight problem. It can also help you in losing your weight.

Herbal teas AKA green tea can help in reducing the irritation caused by the congestion due to accumulation of phlegm in your throat. The ingredients found in herbal tea help in relaxing your physically as well as mentally by melting away the accumulated phlegm and mucus.

You can easily clear phlegm from throat by consuming uncooked and raw garlic and ginger. Both of these natural ingredients are used for this purpose since many centuries due to their anti-inflammatory and anti-bacterial properties. Along with treating the problem of phlegm in throat they can also be used to treat a number of other health problems as they help in destroying harmful microbes and bacteria.

The problem of constant phlegm in throat can also be resolved by eating spicy foods especially when you live in an environment with excessive humidity. When you eat spicy food it can loosen your phlegm and it will run out of your nose. In this way spicy food can speed up the recovery from common cold. You can add peppers, chilly, horseradish and wasabi in your food to get relief from phlegm in throat more effectively.

By rubbing this oil on your affected body parts including throat and nose you can easily get rid of the phlegm in your throat. You can also massage this oil on your neck and chest to relive the congestion caused by the accumulation of mucus. If you rub it with few drops of coconut oil then it can relieve your problem more effectively. It will melt you mucus more effectively if you rub this oil in a particular motion instead of just applying its few drops without massaging it properly.

If any of the natural remedies discussed above does not show effective results then you should not hesitate in using OTC medicines to clear phlegm from throat easily and quickly. But while taking drugs you should keep in mind that it can be harmful to take them without proper prescription from a medical professional. Still many people prefer to take OTC expectorants to get rid of the phlegm in their throat.

Onion contains two important elements sulphur and quercetin which can help in loosening constant phlegm in throat. So that is why onion is commonly used as a natural remedy for chest congestion since long. The mucus in the throat and chest is broken by both of these ingredients to ease congestion. You can get effective results on your throat congestion within 2-3 days by chewing raw onion 5-6 times a day. You can make it tasty and easily edible by adding some salt and lemon to the raw onion.

Dos And Don’ts Of Getting Rid Of Phlegm In Throat