10 Ways To Get Rid Of Mucus In Throat

Whenever we suffer from cough, we usually also develop mucus. We might wonder what exactly it is. Mucus is nothing but our body’s response to cough and it is a natural defense mechanism. It is a means by which the body is trying to expel virus from the body and control the resultant infection.

Cough as we all know is caused by a viral infection. However, constant mucus could be a nagging problem. Hence we should find out ways and means by which we should get rid of mucus in throat. Here are a few tips which could be useful in getting rid of phlegm or mucus from the throat.

Mucus in throat can be controlled effectively by going in for hot baths in the feet. However this should be done by rubbing the feet with mustard powder and then taking bath. This will promote better blood circulation and could help a lot in getting rid of mucus in throat. However, after taking bath it is important for you to go straight into the bed and if possible you should also wear a pair of socks. This will increase heat in the body and could also be helpful in fighting viral infection which leads to cough and cold. As we all know cough and cold are the natural defense mechanism of body and therefore when the virus is fought efficiently, the symptoms associated would also recede.

It has been proven time and again that apple cider vinegar is a very effective and time tested way in which one can control thick mucus in throat. It helps in thinking the mucus concentration in the throat and also aids in expectorating it. All that you need to do is to add one teaspoon of apple cider vinegar to a single cup of water. The same should be drunk at least a few times daily. It can help to break the mucus which could have accumulated in the throat.

3. Compressions Can Also Help Quite A Bit

From times immemorial compressions and massages have been found to be useful and effective ways and means to treat cough and cold and also the various body pains associated with it. A simple exercise could do the trick. You could place yourself on the edge of the bed. You should then ask somebody to massage the upper back portion of the body or could even try to give some light blows. This will promote coughing. Once this happens it will help the phlegm to move up from the throat and you will start coughing and expectorating. It is another old and time tested method to treat constant mucus in throat. 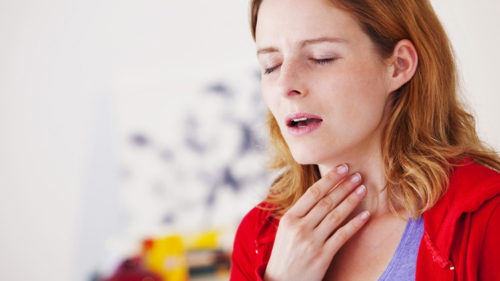 4. Chest And Back Massages Can Also Help

Apart from this going in for chest and back massages is also a wonderful way but which one can stimulate expectorant coughing. This is a safe method because you will not be using any chemical or synthetic medications which could cause more harm than benefit.

It is important to stop formation of mucus in the various throat and bronchial areas. This can be done by bringing in some changes to food habits if you are suffering from cough. It would be advisable to stay away from certain foods like eggs, meats, dairy products, sugar, fatty dishes and alcohol. Eating the above foods may lead to excess formation of phlegm or mucus and could lead to all sorts of problems. It would be advisable to drink plenty of water, eat raw fruits, drink hot herbal teas and drink vegetable soup made from various vegetables. Further smoking should be strictly avoided because it will lead to more formation of phlegm. Smoke is considered as an infection by the body and leads to accumulation of more mucus in the throat and bronchial areas. For those that struggle to go cold turkey with cigarettes might opt for smok vape pen technology to help work them away from smoking. Smoking can be a difficult habit to kick but there are a lot of options out there to help you to get rid of the habit. It is one of the most important things you must do to clear mucus from the throat. Following the above changes to diet will also help increase the immune power and help to fight the viral infection leading to cough and cold.

Gargling with salt early in the morning is another great way by which you can get rid of mucus especially during the early morning. Salt is a mild antiseptic and could be extremely soothing for inflammation and pain in the throat, which are common symptoms of cough and cold. Early Chinese people also used a method called cupping which could be effective in removing phlegm or mucus. It is about placing small jars of glass onto the back. The jars are heated. When heated the jars have vacuum seal inside and this results in blood moving to the skin surface. It also gives relief from mucus accumulation and also helps to remove toxins from the body.

There is no doubt that going in for aromatherapy could be a fantastic way to control the production and accumulation of mucus in the throat. It also could help move phlegm from bronchial area and lungs to the throat. You can use a combination of cedar, pine and eucalyptus and add them to boiling water. The steam that emanates from the boiling water should be inhaled. You should cover your head with a towel and ensure that the steam hits your face and throat and does not get dispersed.

For centuries, slippery elm has been considered to be an effective way to get rid of mucus from the throat. It is simple to make and drink. You need to slipper elm to a cup of boiling water and sip it thrice or four times and it will give great results.

Though many people may not believe in it, acupuncture has been known to provide very good relief from mucus accumulation in the throat. however it has to be done with the help of an experience acupuncturist.

Adding pepper, honey, turmeric to hot water could be a great way to reduce discomfort in the throat and could also help in lessening the thickness of mucus in the throat.

Pros Of These Methods

It has to be borne in mind that there are a number of advantages with the above methods of removing mucus from the throat area. They are free from synthetic compounds and chemicals. Hence they are free from side effects. They can be done in the home with the help of family members. They are not very expensive and therefore can be continued for around 8 to 10 days to get the best results.

Cons Of Such Approaches

However, we need to keep in mind that those who suffer from special medical conditions like blood sugar, high blood pressure, heart problems and other such conditions should be careful about following the above methods. Though they are relatively safe, it could impact them negatively and could lead to other serious problems. So, before undertaking such treatments for patients with special conditions, it would be better to get counseling from doctors.

At the end of the day there is no doubt that while the above might help relieve the symptoms there is no magic cure. According to an old adage, mucus and cough gets cured in one week with medication. Otherwise it would take seven days. These treatments could alleviate the suffering of the patient significantly.