10 Ways To Get Rid Of Gas In Chest Fast

The gas pains are known to be the one of the most common problems that the people today face. Most of the people suffer from this pain almost on a daily basis. Undesired sounds accompany this pain which can make one feel extremely uncomfortable.

The pain mostly occurs when the gas that gets formed in the intestine during the process of digestion does not get released from the body and instead remains within the intestine. One of the major symptoms of the gas pains is the pain that occurs in the chest. The ways to get rid of gas in the chest are discussed below.

The gas often gets build up due to the poor digestion in the intestine. Drinking lots of fluids during a chest pain due to gas removes the food that is undigested. The foods that are rich in fiber is usually the cause for the formation of the gas which leads to indigestion and increased intake of fluids. This increased intake of fluids not only reduces constipation but also allows the gas to get released from the body.

2. Lie Down In Positions Which Alleviate The Gas In The Chest

To get rid of gas in the chest, one should lie down with his head kept in an elevated position. Rest in this manner for getting rid of the discomfort. One can also kneel on his bed in a way that his buttocks remain in the air and his head faced downwards. This position encourages the gas to get released from the body. While breathing in, one can also lie down with his two legs pressed against his stomach and try to force out the air as if he is passing out the gas. While trying to push out the air from the abdomen, one should make sure that his stomach is not full. One should try to be alone while trying these positions.

3. Positions For Lying Down In Bed

There are certain positions for lying down that are recommended by doctors for preventing the gas to get formed in the chest. These simple positions are extremely effective and help one to reduce the discomfort and pain in the chest. One is generally asked to lie down on his left side. It relieves the chest pain in women especially those who are pregnant and had a colonoscopy. 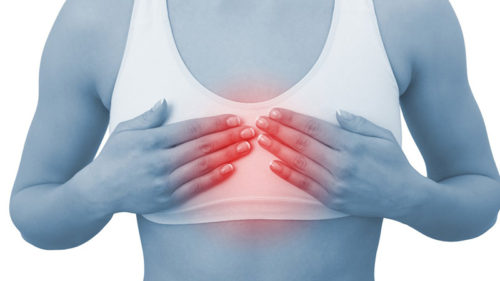 4. Gulping In Some Hot Fluid

Drinking a cup of hot water is a quick solution from getting relieved of the gas that gets build up in the chest. It is one of the quickest and user-friendly ways of getting rid of the annoying chest pains due to gas.

Apple Cider Vinegar has wide health benefits and helps to maintain a good immune system. It is a great remedy for the gas pains in the chest area both for the chest pain in women and men. Only a few spoons will perform the trick of easing down the discomfort. This is to be mixed with water and consumed during the chest pains.

Baking soda is very commonly used for getting rid of the gas chest pain for hours. A few teaspoons of baking soda is to be mixed in a cup of hot water and is to be consumed in sips till the condition of gas in the chest improves. Many people also try out potato juice as it also improves the gas conditions in the chest. Messaging the rib cage also helps to reduce the chest pain for hours due to gas.

The wind that is trapped inside the chest and is causing pain can be released and the person suffering from pain can get relieved by performing some physical activities. One can also walk for a few minutes for getting relieved from the gas pains in chest.

Some fruits like papaya are known to alleviate the gas pains in the chest. Papaya heats the system which prevents the building up of the gas.

The charcoal capsules help to reduce the wind that is trapped in the chest. Eating mustard can also relieve a person from the gas pains. Cumin, cardamom, and turmeric also help in reducing the chest pains caused due to gas.

Some Other Useful Tips: